In the early 1970s, two women from very different backgrounds met in Kathmandu and became intimate friends. Both were ‘hippinis’ whose unique stories will be part of the Photo Kathmandu festival next four weeks.

END_OF_DOCUMENT_TOKEN_TO_BE_REPLACED

In an unassuming office in Kupondol, electrical engineer Suraj Karki turns on the DC power supply, and the room goes quiet as his team waits for the octocopter on a table to show signs of life.

Sure enough, its coloured lights blink, and the rotors start spinning with a whine. Relief and excitement floods the office. Later, after a successful outdoor test flight, Karki’s team names the medicopter Puspak, after the legendary flying machine from the Ramayana. END_OF_DOCUMENT_TOKEN_TO_BE_REPLACED

LUCIA DE VRIES
Relics of the hippie era in Kathmandu have been slowly erased by the passage of time, and whatever remained in Jochhen from that psychedelic period was brought down by last year’s earthquake.
One of the few hippie hangouts that is still intact on what used to be called Freak Street is Snowman Café. On a recent afternoon, it was packed with Nepali youngsters but none of them had any idea how the street got its name.

William smoking bong “I brought this bong from Kathmandu and used it for a while. It is basically a bamboo water pipe. It got me so stoned that I forgot what day of the week it was. So I gave it up.”

END_OF_DOCUMENT_TOKEN_TO_BE_REPLACED 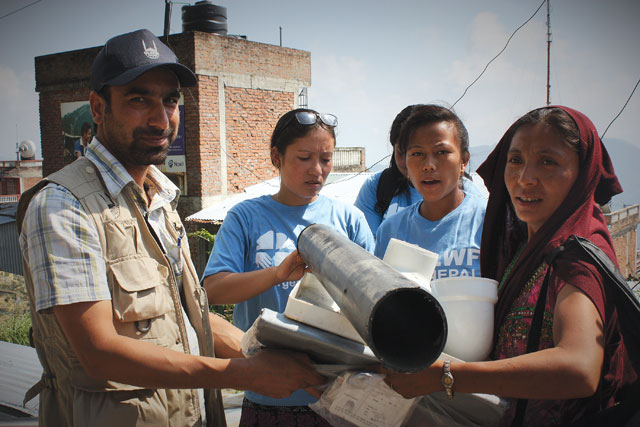 HELPING TOGETHER: IRW officer Bilal Agmad Zargar (left) and LWF officer Chenyen Nekor (right), together with a volunteer hand over construction materials to Nirmala BK in Kalikasthan of Rasuwa.

A Muslim relief agency joining hands with a Christian organisation to help Buddhist earthquake survivors in a largely Hindu country may sound implausible but that is exactly what happened in Rasuwa earlier this month. END_OF_DOCUMENT_TOKEN_TO_BE_REPLACED 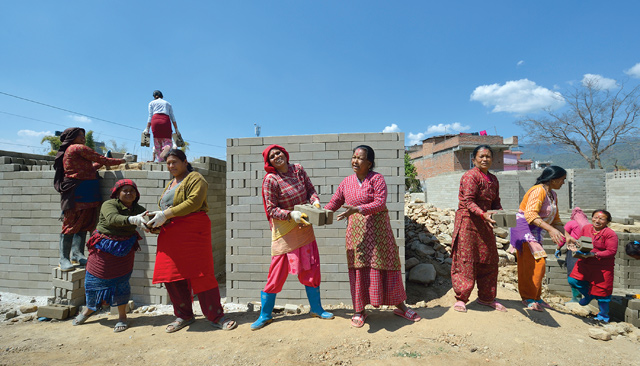 Sanogaun, a small Newar settlement on the southern fringes of Kathmandu was flattened by the earthquake last year. Now, the community is using an innovative technology to rebuild all its 49 homes so they are cheaper and resistant to future quakes.

The interlocking brick technique developed by Nepali inventor Gyanendra R Sthapit at the Habitech Center of the Asian Institute of Technology in Thailand combines the strengths of rammed earth and compressed blocks. It has been used in post-tsunami reconstruction in Thailand in 2008 and after Cyclone Nargis ravaged Burma in 2010 to build more than 1,000 homes, schools, and health clinics. In Bhutan, over 100 quake-proof houses and schools have been built using the technology. END_OF_DOCUMENT_TOKEN_TO_BE_REPLACED

Just a few minutes into Narbahadur’s film the audience gasps. After four days of walking the 18-year-old former child soldier arrives home in a remote part of Humla district. He has warned the viewers: ‘There is nothing in my village.’ But they are unprepared for the images of grinding poverty in the young filmmaker’s home: malnourished sisters swatting flies, an emaciated mother, and his grey-haired father, a blacksmith who is going blind.

Narbahadur’s film, My Sun Rise, is part of the Through Our Eyes trilogy produced by three teenagers who joined the Maoists when they were only twelve. Like Narbahadur (back centre, pic), Sukmaya (centre) comes from a Dalit background, and as a child was painfully aware of the fact that she was ‘at the bottom and always the last’.

END_OF_DOCUMENT_TOKEN_TO_BE_REPLACED

When my Hero Honda Splendor bike got stolen last year, I felt a deep sense of loss. The Honda had grown on me like no other bike had before. The bike (re-baptised as ‘Heroine Honda’) took me to remote destinations inside the Kathmandu Valley, opening my eyes once more to the beauty of this place we live in.

Buying a new Honda did not seem like a good idea. Valley bikes get stolen at the rate of 140 a day. Queuing for petrol for hours no longer appealed to me. So instead I decided to find an e-bike: the Foton TDP33ZWG, fresh from Zhucheng, China. It somehow reminded me of a centaur. The bike’s front looked feminine, with a cute white basket and a scooter-like dashboard. It had an extended back part, with a solid battery compartment and tool box under a comfortable seat, and a sturdy back seat. I did not even take a test drive. Just paid and drove off.

END_OF_DOCUMENT_TOKEN_TO_BE_REPLACED

Yesterday I heard the news: Dana had died. She probably died the way we knew she would go, on a cold winter day, on the street, unwashed, staring at occasional passers-by with her unwavering dark eyes until they became uncomfortable and left her to die.

A train of memories. Her first appearance in my Patan neighbourhood. One day a well built, barely dressed person collapses in front of my two-storey house, face down in the mud. When the person is still there some hours later, in the same position, I start to worry. “Dai, please wake up!” I call and shake the foul smelling body.

END_OF_DOCUMENT_TOKEN_TO_BE_REPLACED

When Pabitra Tamang’s parents found out she was suffering from a life-threatening disease called a-plastic anaemia, they took a desperate decision: they left their jobs as daily labourers to take care of five-year-old Pabitra and her two sisters.

With no money to pay the rent, the landlord threatened to throw them out of their tiny Bhaktapur room. All three children left school and moved into the hospital, much to the chagrin of the medical staff. Only Pabitra kept smiling: she loved the extra attention and her chance to visit the hospital’s playroom.